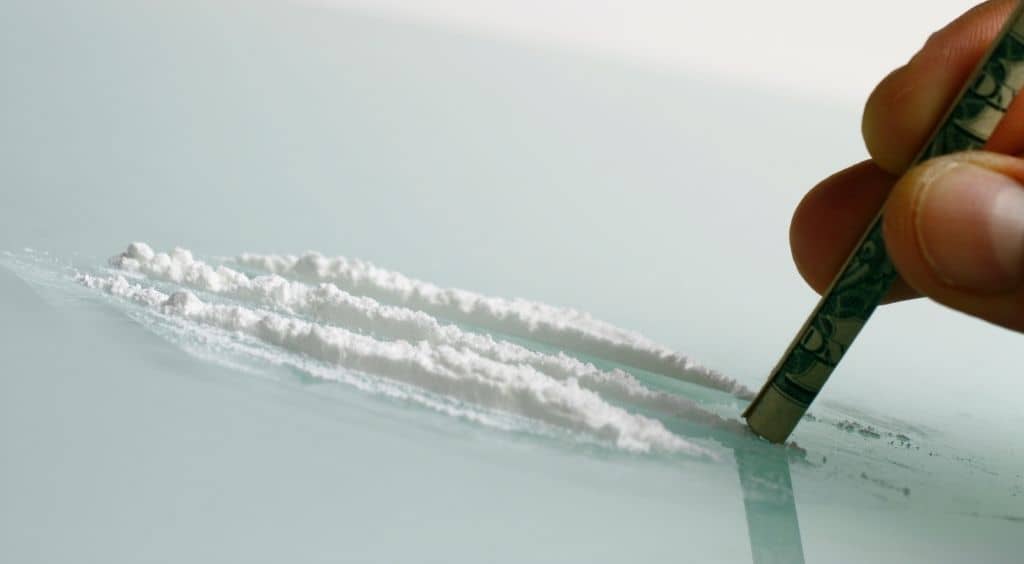 Cocaine is a powerful and habit-forming stimulant drug that is made from the leaves of the coca plant (a plant native to South America). While it is approved for medical use in local anesthesia, the majority of cocaine use in the United States is recreational or illegal.

Before being approved for medicinal use, though, South American natives used to chew the leaves or brew them into a tea to combat fatigue and obtain more energy.

Cocaine is white in appearance and comes in the form of a fine, crystal-like powder or “rock” that is broken up into a fine powder. People often snort the drug, rub it onto their gums, or dissolve it in water and inject it into the bloodstream.[1]

Cocaine users may refer to the name using various street names, nicknames, and slang terms to try and fly “under the radar” from police and other suspecting individuals. The street names for cocaine are often based on the appearance of the drug, the effects it produces, or what substances it is mixed with.

Cocaine Street Names Based on Appearance

Many nicknames are based on what the drug looks like. Pure cocaine comes in the form of a thin white powder, leading to common nicknames like:

Some cocaine can take on a shiny, scaly appearance. This cocaine is thought to be very high quality and is often referred to as “fish scale” or “scales.”

The most popular way to use the drug involves crushing the white powder into a very fine substance, dividing the powder up into small, straight lines, and snorting the lines of cocaine. Some cocaine slang terms come from the idea of “snorting lines.” These include:

People may also microdose cocaine by using very small amounts in one sitting. Rather than snorting a “line,” they may snort a “bump.” As a result, another nickname for cocaine is “bump.”

Cocaine Slang Terms Based on The Effects of the Drug

Many cocaine street names are derived from the stimulant effects of the drug. Cocaine can cause a rush of energy and euphoria as well as increased talkativeness, restlessness, focus, and ambition. Nicknames based on the effects include:

The Most Common Nicknames for Cocaine and Crack Cocaine

Some of the most widely used nicknames originate from the word “cocaine” itself. These are:

Crack cocaine, which involves combining cocaine with baking soda or another household chemical and boiling it down to a solid substance.[2] Crack cocaine is thought to be a more potent and addictive form of cocaine.

Street Names and Slang Terms Based on Cocaine Drug Combinations

Many people who use cocaine mix it with other substances to produce enhanced effects. Common substances that are mixed with the drug include heroin, marijuana, ecstasy, alcohol, meth, LSD, and PCP. Most of these drug combinations have their own slang terms, such as:

Nicknames Based on Geography

Occasionally, slang terms are used that are based on the geographic origin of a certain batch of cocaine. While these names aren’t always accurate and are based solely on what one dealer tells another, common nicknames include:

Learning about the street names, slang terms, and nicknames for cocaine can help friends and family determine whether or not a loved one, particularly teens or children, is abusing this dangerous and addictive drug.

If someone you know is struggling with cocaine addiction, our team at Mandala Healing Center can help. Our holistic substance abuse treatment programs involve evidence-based and individually-tailored therapies that can help your loved one heal from the inside out. We can help them detox, discover the root cause of their addiction, adopt healthy coping skills, and create a personalized relapse prevention plan.

Don’t wait any longer. The earlier your loved one gets help, the easier recovery seems. Call now to get started.