Home » Blog » Is it Safe to Mix Benadryl and Alcohol?

When seasonal allergies roll around, people all across America take steps to stock their medicine cabinets with over-the-counter (OTC) allergy medications to provide them with relief. Antihistamines like Benadryl can effectively reduce allergy symptoms like stuffy nose, watery eyes, sneezing, or sore throat. However, Benadryl is not meant to be taken on a daily basis. It is also not meant to be mixed with alcohol or other central nervous system depressants.

As an OTC medication, many people believe Benadryl is safe. It is true that the medication is safe when used as directed, but it can also be abused for its sleep-inducing qualities. Some people even take it with alcohol to produce stronger effects. Unfortunately, mixing Benadryl and alcohol is extremely dangerous. Doing so can cause an array of negative side effects such as sedation, dizziness, and even overdose.

How Does Benadryl Work?

Benadryl is a brand-name antihistamine containing a medication called diphenhydramine. It is a widely used OTC medication that can treat allergy symptoms and allergic reactions. The medication is available in many different forms, including:

When an allergic reaction occurs, the body produces histamine. Histamine is a natural substance that responds to allergens by causing a stuffy nose, watery eyes, itchy skin, and sneezing. Antihistamines like diphenhydramine block the production of histamine, thereby preventing and reducing allergy symptoms.[1]

Side Effects of Mixing Benadryl and Alcohol

Benadryl, like alcohol, is a central nervous system (CNS) depressant. CNS depressants reduce breathing and heart rate while producing side effects like drowsiness. When consumed separately, both alcohol and Benadryl can produce drowsiness, reduced coordination, and memory impairment. When combined, however, these side effects become exacerbated.[2]

People who mix Benadryl and alcohol may experience:

Due to the combined depressant effects of both substances, people often abuse Benadryl and alcohol to promote sleep.

Dangers of Mixing Benadryl and Alcohol

The side effects of Benadryl and alcohol can be extreme, even in relatively low doses. By depressing the central nervous system, many of the body’s essential functions, such as respiration and heart rate, slow down to dangerous levels.

Mixing alcohol and Benadryl can produce a level of sedation that is so extreme it causes individuals to lose consciousness. As a result, people who combine these substances should avoid driving, operating heavy machinery, or engaging in any potentially harmful tasks. In extremely high doses, an overdose is possible, requiring emergency medical treatment and hospitalization.

Symptoms of a Benadryl overdose include:[2,3] 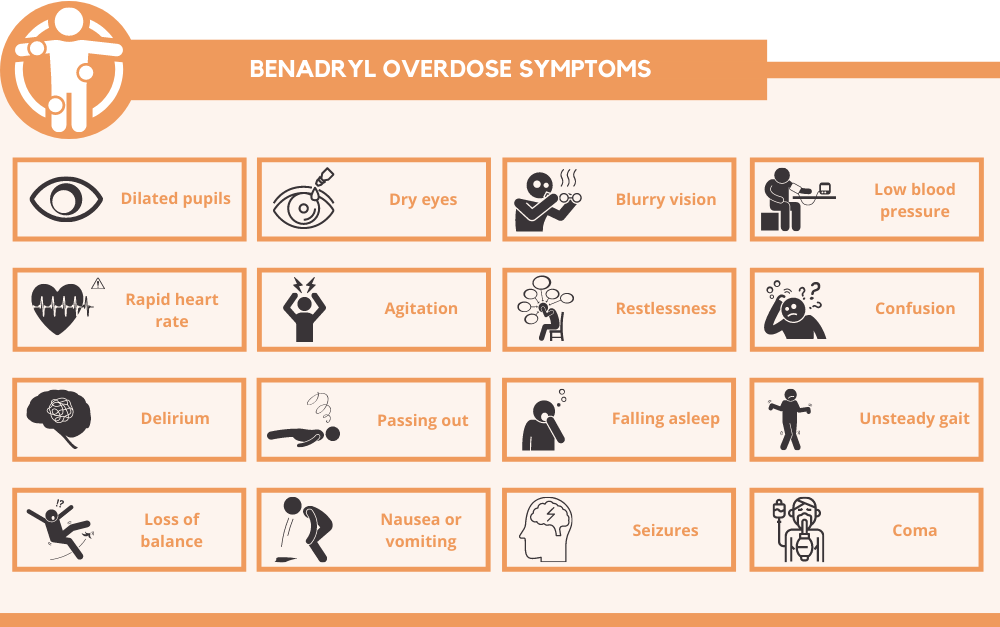 Benadryl not only stops histamine production, but it can also block acetylcholine–a neurotransmitter in the brain that is essential to learning and memory. Similarly, alcohol is known to impair memory, causing brown-outs and blackouts when consumed excessively. Combining these two substances substantially increases the risk for memory and cognitive impairment.

The risks associated with mixing Benadryl and alcohol are even more dangerous in seniors. These substances can cause problems in fine motor skills and coordination, leading to an increased risk of falls.

In addition, some evidence shows long-term antihistamine and alcohol use can increase the risk for dementia. They can also worsen existing dementia.[4]

Seniors should be particularly careful when using Benadryl because they must consider the other medications they are taking. For example, some cough syrups contain up to 10% alcohol.

Some people believe mixing Benadryl with alcohol can make them sleep even better. While it’s true that both substances can make people feel sleepy, the sleep obtained while under the influence is not quality sleep. As a result, people often feel groggy or tired the next day. Sometimes, abusing Benadryl and alcohol can actually make a person dizzy, preventing them from being able to fall asleep at all.[5]

If you or a loved one have been drinking alcohol while taking Benadryl, it’s important to be aware of the risks. It’s also vital that you never intentionally abuse both substances at once. Mixing the two substances can lead to physical dependence and addiction, requiring professional treatment.

Here at Mandala Healing Center, we’re here to help you improve your quality of life by enabling you to give up drugs and alcohol. Learn more about our treatment programs or begin your recovery journey by calling and speaking with one of our dedicated addiction specialists today.