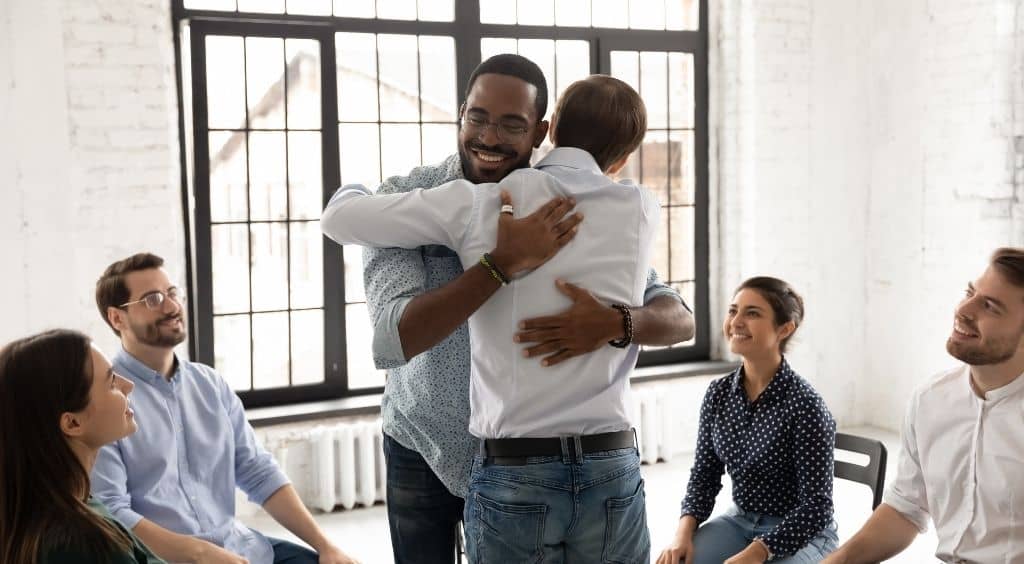 According to the National Survey on Drug Use and Health, men are twice as likely to suffer from substance abuse than women, with a rate of 10.8% versus 5.8%.[1] While men and women both suffer from addiction, their motivations for abusing substances tend to differ.

Men are more likely to turn to drugs and alcohol to amplify their positive feelings rather than self-medicating negative emotions. Men usually drink or abuse drugs in social situations to increase feelings of happiness, talkativeness, and sociability. However, the general risk factors of addiction – like family history, childhood trauma, and mental illness – still apply to men.

The treatment industry needs to take into consideration the unique risk factors of addiction for men. Individualized treatment is the best way to address addiction recovery, as it allows patients to receive treatment methods specific to their unique issues and needs.

Risk Factors of Addiction in Men

Men and women may abuse substances for similar reasons, such as childhood trauma, mental health conditions, and family history. However, it is more common for men to abuse substances due to male-specific societal pressures, a lack of strong social connections, as well as a lack of support for childhood abuse and sexual trauma.

Some of the most common risk factors for substance abuse and addiction among men include:

One of the biggest risk factors for substance abuse in men is societal pressure. Oftentimes, men are expected to behave a certain way, such as never crying or showing emotion and remaining “strong” or “masculine.”

Unfortunately, society has pushed the misconception of masculinity being directly tied with aggressive behavior and being a sort of “playboy” onto men. This causes many men to equate their self-worth with how many women they date or how strong or aggressive they are.

As a result, some men may feel a strong sense of shame for not being “manly” enough. The pressures to fit society’s image of masculinity often cause men to abuse substances to fit those molds.

While many people are unaware of the frequency of male sexual assault, men become victims of abuse almost as frequently as women. In fact, 1 in 6 boys become a victim of sexual abuse before they turn 18. 1 in 4 men becomes a victim of unwanted sexual encounters throughout their lifetime.[3]

The social stigmas that surround male victims of childhood abuse and sexual trauma tend to be a major contributor to male substance abuse patterns. For example, men are (unfairly) viewed as inherently sexual creatures. This causes many individuals to be unable to comprehend a situation where men do not want sexual attention.

Oftentimes, when a man speaks out about being sexually assaulted, they are met with reductive statements. For example, when a child or adult male is assaulted by a woman, people tend to perpetuate misconceptions by saying things like “why wouldn’t a man want to have sex with a woman.” This prevents men from wanting to speak out about their sexual trauma, as they are often shamed into believing they are strange or “less of a man” for admitting to being taken advantage of.

On the flip side, men also tend to stay quiet when it comes to being assaulted by another man. This is because of society’s harmful views on male heterosexuality and heteronormativity. Heterosexuality is often seen as “proof” of manhood, while homosexual encounters are stigmatized – even when they are unwanted encounters.

These harmful ideologies prevent men from speaking out against the sexual assault they have faced. This prevents them from receiving the support they need to recover from abuse, leading to self-medication and increased mental health issues.

Another huge risk factor for male substance abuse is loneliness and isolation. This ties into societal stigmas surrounding masculinity, as men are “not supposed to” show too much emotion.

This prevents men from making important interpersonal connections with their peers. As a result, men become less likely to open up to their friends about the current issues they are facing emotionally. This leads to emotion suppression and feelings of loneliness.

As a result, men may turn to drugs and alcohol to cope. Many men feel shame in regards to their sadness, causing them to suppress uncomfortable feelings with substances in the name of “masculinity.”

According to research, the following statistics reflect common substance abuse patterns among men:[4]

Addiction treatment specific to men focuses on male-specific addiction factors. This provides men with more time to address the root causes of their addiction than they would have in a co-ed facility.

Additionally, being in an all-male setting could help men learn how to have an open and communicative relationship with their male friends. This teaches them how to share their emotions with other men in a supportive and healing manner. As a result, their motivations for emotion suppression with substance abuse decrease.