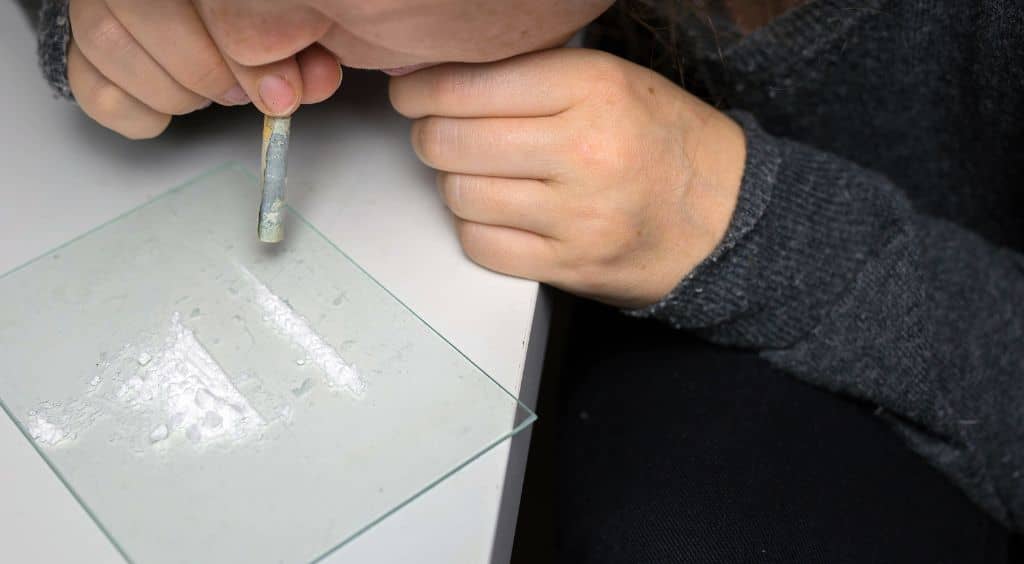 Heroin is a powerful opioid drug that is similar to morphine and oxycodone, but it is not approved for medical use.[1] This opioid drug is considered more addictive and more deadly than many popular prescription opioids.

The media often portrays people who use heroin as intravenous (IV) drug users, so many people who aren’t familiar with the drug think that everyone who uses heroin injects it into their bloodstream. While injection is a common method of administration, heroin can also be smoked or snorted.[1]

Snorting heroin (insufflation) is often viewed as safer than injecting it because insufflation doesn’t produce the same strong rush that IV heroin use does. It is also viewed as an easier way to use heroin because there is some level of skill required to shoot up with a needle and syringe. Still, snorting heroin is highly addictive and extremely dangerous. Snorting any drug can cause significant long-term damage to the brain and body, especially after an extended period of time.

Why Do People Snort Heroin?

Both smoking and injecting heroin require specific tools and skills. For example, in order to inject heroin, someone must get their hands on a needle and syringe, learn how to find a vein with the needle, and inject the substance correctly. In many states, you can’t purchase a needle unless you have a prescription, and even in the states where anyone can buy a needle at the pharmacy, many first-time IV drug users are hesitant to ask a pharmacist for needles because they don’t want to be judged. They may also not know what type of needle to ask for.

Smoking heroin, on the other hand, isn’t the same as smoking a cigarette or smoking marijuana. It is a complex process that usually involves a hand-crafted aluminum foil device. New drug users may not know how to inject or smoke heroin, so they snort it, instead.

Snorting is fairly simple and straightforward. It doesn’t take a lot of brain power to figure out and requires limited supplies. In addition, many people believe the misconception that snorting heroin is safer than smoking or injecting it because the absorption process happens slowly and there is a delay before the effects of the drug begin.

It may also be easier to hide heroin insufflation because it doesn’t leave track marks or a smell, making heroin use easier to conceal. Ultimately, there are many reasons why people snort heroin, but doing so is never safe.

Risks and Dangers of Snorting Heroin

Heroin insufflation is extremely dangerous for a number of reasons. First, it can lead to addiction and overdose. Although it may seem like snorting reduces the risk of overdose because it takes longer for the effects to take hold, this assumption can cause drug users to use heroin in higher doses, allow their tolerance to build up very quickly, and develop an addiction over a short period of time. And, when taking heroin in high doses, it doesn’t matter how it is consumed–it can still cause respiratory depression and life-threatening overdose.

Snorting heroin also increases the risk of IV heroin use. This is because people who get addicted to heroin develop a tolerance to the drug, meaning they have to continue taking higher doses to feel the same effects. Eventually, their sensitivity to heroin becomes so low that insufflation barely produces pleasurable effects. In an attempt to get high, users often transition to IV drug use because they know it will produce stronger effects. In other words, snorting can be viewed as a gateway to shooting up when it comes to heroin.

Heroin insufflation can also cause damage to the nasal cavity and cardiovascular system. Snorting causes serious damage to the mucus membranes in the nose, throat, and nasal passageways.[2] Potential consequences of snorting heroin include:

The best way to avoid these health issues is to stop using heroin and seek treatment immediately.

Signs Someone is Snorting Heroin

Although heroin insufflation may be easier to conceal than shooting up, there are still many ways to know when someone is snorting the drug. People who are snorting heroin may have paraphernalia such as:

They may also exhibit physical signs such as having a frequently runny nose, sniffing a lot, or itching their face or nose. Another sign is chronic or significant nasal irritation, causing the nose to appear red and raw-looking.

While under the influence of heroin, a person may exhibit the side effects of the drug, such as:[3]

If you or someone you love are abusing heroin, the time to get help is now. Heroin abuse can cause significant and lasting impacts on your life, causing your mental, physical, and emotional health to decline. The best way to regain control over your life is to ask for help from an addiction treatment center.

Here at Mandala Healing Center, Clients are taken on a journey of healing through complete immersion into evidence-based clinical modalities, multifaceted alternative therapies, and expert medical management, allowing them to fully detox and recover from drug and alcohol addictions. Through a program of care designed to encourage change, a foundation is created that allows clients to find their higher purpose and reclaim their lives.

Don’t wait any longer. Call now to learn about your heroin rehab options.