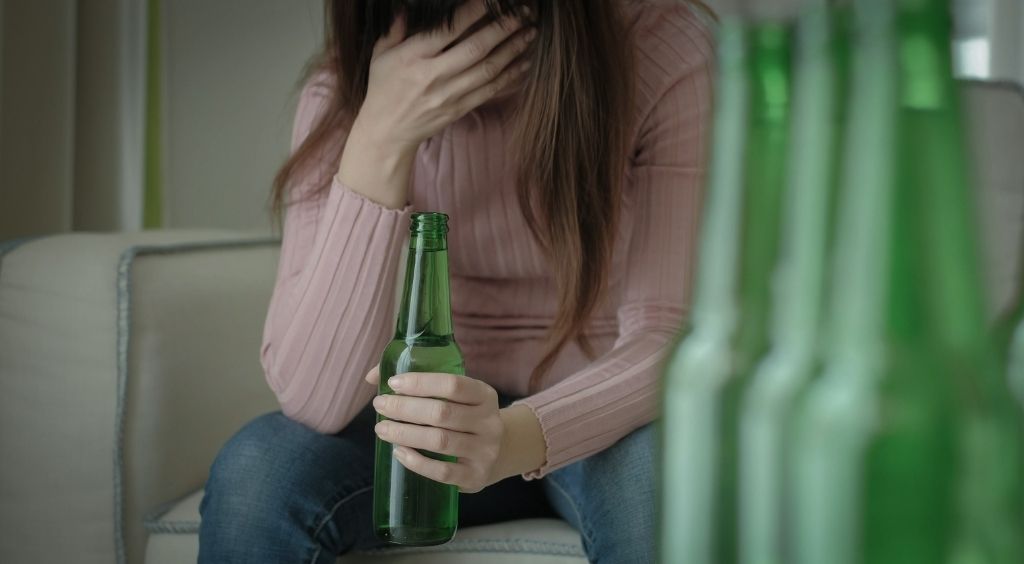 Alcohol use is part of the United States’ culture. The majority of American adults consume alcohol from time to time. Whether it is a glass of wine with dinner, cocktails at happy hour, or beer at a BBQ, alcohol is present during many occasions and events.

While many people have a healthy relationship with alcohol, some struggle to manage their drinking. According to the National Institute of Health, about 26% of adults in the United States reported at least one episode of binge drinking in the past month. About 6% reported heavy drinking in the previous month.[1]

While problematic drinking, such as engaging in heavy drinking or binge drinking, is fairly common behavior, it is also a serious issue. People who engage in alcohol abuse are much more likely to require emergency medical care for an accident that occurred while they were under the influence.

People who engage in problem drinking behaviors are also at risk for physical and mental health issues, including addiction. However, it can be hard to determine whether someone’s problematic drinking has crossed the line from alcohol abuse to alcoholism. Most people who develop alcoholism require addiction treatment to overcome the condition. Getting treatment as early in the addiction as possible is essential.

What is the Difference Between Alcohol Abuse and Alcoholism?

Many people use alcohol to help them manage difficult emotions or experiences. For example, someone may drink at a party to ease their social anxiety. People may drink to dull feelings of boredom, sadness, or loneliness. Using alcohol to help cope with uncomfortable feelings is often called “self-medicating,” and it is a form of problematic drinking.

But are these types of alcohol abuse signs of underlying alcoholism?

In short, no. Alcohol abuse has many serious risks and consequences and should not be taken lightly or dismissed. If someone abuses alcohol, they should receive treatment and support to learn new, healthy ways to cope with their feelings and avoid abusing alcohol.

But alcoholism differs from alcohol abuse in a few key ways. First, alcoholism is defined as physical dependence on alcohol. Someone who drinks alcohol heavily for a prolonged period will likely develop a dependence on it. When they attempt to stop, their body will be unable to adapt to the absence of alcohol and the person may have uncomfortable–or even dangerous–physical symptoms. 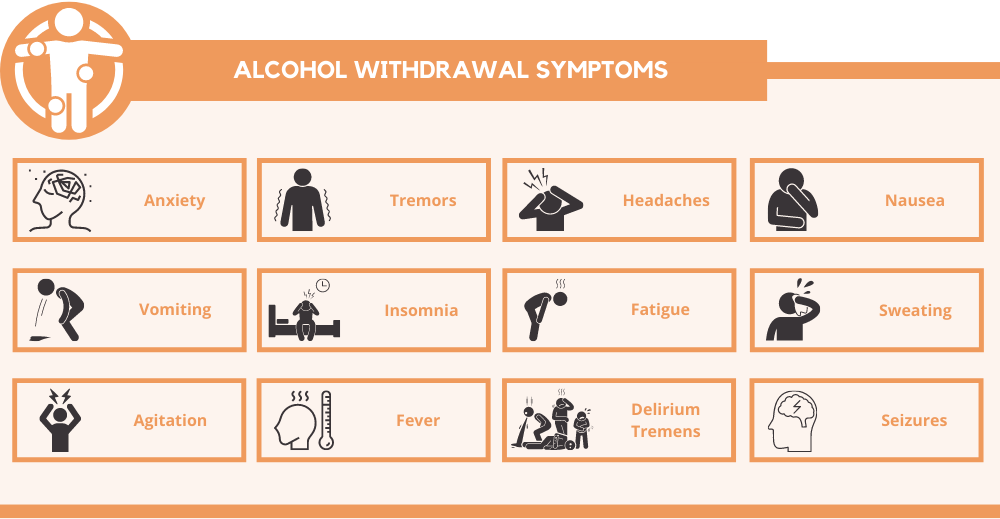 In addition to a physical dependence on alcohol, alcoholism is defined by a lack of control around alcohol use. They may continue to drink despite the negative consequences to their health, safety, relationships, or finances.

According to the National Institute of Health, adults can safely drink in moderation. Moderate drinking, or casual drinking, is defined as two alcoholic drinks per day for men, and one drink per day for women.[1]

Binge drinking is drinking a large amount of alcohol in a short time. For men, a binge-drinking episode is defined as having five or more alcoholic drinks in about 2 hours. For women, it is four or more drinks in two hours. This is the amount of alcohol required to elevate a person’s blood alcohol content (BAC) to 0.08 or higher.

Alcohol abuse is considered a mild Alcohol Use Disorder. People may require treatment, therapy, or support to learn how to manage their drinking and find other coping mechanisms. They usually do not require detox or withdrawal management. 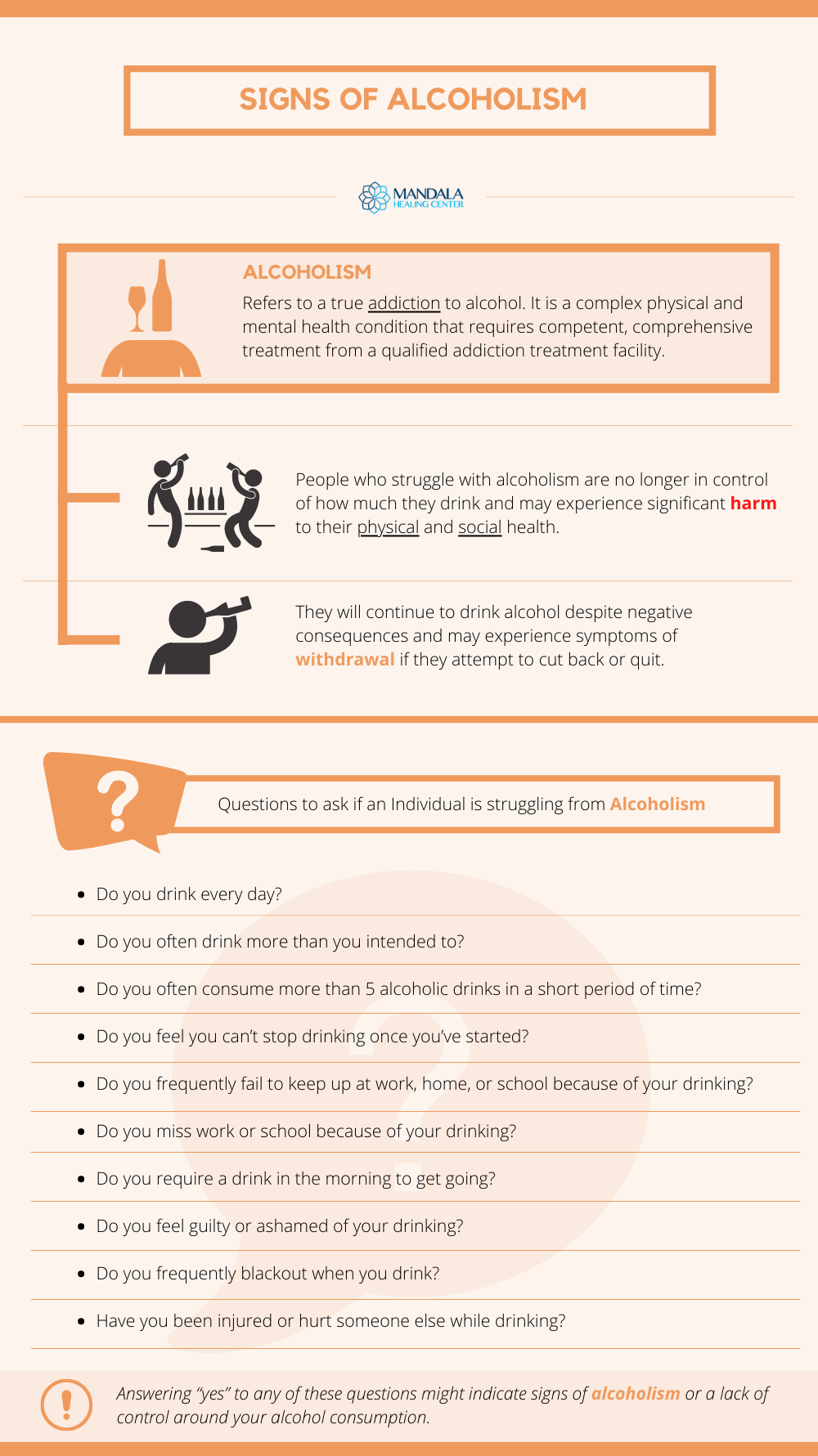 Alcoholism differs from alcohol abuse in a few key ways. Someone who develops alcoholism may start by abusing alcohol and develop an addiction after prolonged abuse. Signs of alcoholism include:

People who develop alcoholism usually require treatment, including alcohol detox. If you or a loved one has signs of alcoholism, comprehensive, compassionate addiction treatment is crucial.

If you or a loved one struggles with alcohol abuse or alcoholism, please reach out to the staff at the Mandala Healing Center. We can develop an individualized treatment plan to meet your needs.

Don’t wait another day for the treatment you need and deserve. Call today.